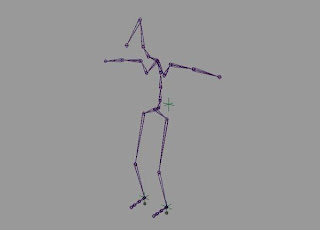 For this project knew that Rigging would be the most challenging task. So far it had proven to be. Because of my lack of experience I found the task very difficult however I was learning new things everyday that are necessary if I want to make my own 3D productions in the future. Building the skeleton for the Squire characters wasn't difficult and didn't take too long. I was particularly impressed with the Maya Bind Skin tools and enjoyed seeing my characters start to come to life. I.K handles make the movement of the arms and legs easier to control. The movement of the characters wrist, hands and fingers is controlled by attributes added to a Control Node. Adding controls isn't necessary but makes the animation of the characters less complicated. All the I.K handles have controls so that arm and leg movement is easily dealt with, for more intricate movement such as the twist in the ankle and ball of the foot rotations are controlled by clicking on the controls for the leg and arms and altering the attributes. After making sure the skeleton and skin move correctly, weights need to be applied to the model so that when the arm bends it looks completely correct and doesn't twist and deform the skin. This tedious process is called 'painting weights' and I found it very difficult to understand, often having to restart from making such a horrible mess of the model the first time round. Eventually i began getting more comfortable with the tools however time is running out so I have done the best i could in the short space of time mainly making sure the major weights were painted like on the fingers, knees and elbows. The Squires head, hat and suit are relatively easy to control because of their basic separate shapes I have parented them to circular C.V curve controls that work on rotation. This part of the production hasn't been particularly enjoyable mainly because its the part just before the animation which is the best part. After doing this I have realized that i need to keep practicing these new Maya techniques so that i can become quicker at my work making me more suitable to work in a 3D studio environment.
Below is an example of a standard Maya skeleton for a human rig.
Posted by adam lawrence at 14:06