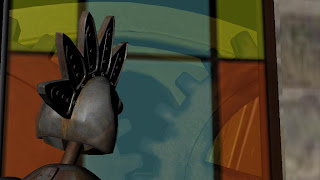 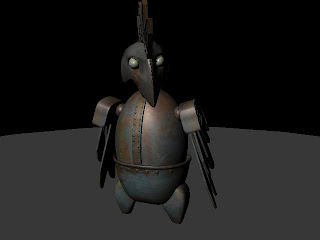 Originally I had planned to Rig the textured Phoenix but it seemed pointless as all of the movements only required locators to rotate the head, jaw, body ,wings and feet. So i quickly was able to do this i start thinking about the animation. This week I have started animating the movements of the Phoenix throughout the whole animation. I was giving some of the Block tests in Maya so I new where the camera was. The Phoenix had been fully textured to appear like it was made from rusty metal. Because the design of the phoenix suggests its a wind-up toy the movements were going to be quite mechanical but i still wanted the Phoenix to appear as though It had just been born. I watched some short clips of eagles opening there wings and tried to incorporate this in the animation of the Phoenix. I drew i small step by step storyboard to the animation and played around with the phoenix for a while to refresh myself with timing. Because this shot isn't particularly long its important that the movements of the Phoenix quickly suggests it has just been born. The phoenix lifts its head and opens it beak at this point the sound team will need find a apply a young bird noise that could be the noise of a Phoenix. The movement of the head and wings will also require some kind of metal scraping sound. The Phoenix has simple feet that made the animation of the body movement look quite crude if I had more time I would consider changing the feet so hat a body rotation could look better. The Playblast let me see how the phoenix would look in real time and the Art director and I were both happy with it, both agreeing that the movements would look good with the stop motion. The Zoatrope animation needed changing. The timing was wrong for the length of the shot and it didn"t rotate. I quickly done this in after animating the phoenix bringing the two animations together to create a finished shot. I then moved onto the second shot of the phoenix looking out of the clock tower. Because I had already textured the tower and animated all the moving parts for shots one and two i simply brought the Phoenix into the tower and but a camera looking over the Phoenix shoulder out of the stain glass window looking at the rotating cogs and clock face. This was the first time i really worked with moving the camera around in Maya and I really enjoyed experimenting with different shots and trying to match them to the animation. The Phoenix required little animation for this shot it just needed to look consistent from the last shot so it just looks up from the floor to the window. The next shot needed me to maintain the consistency by making sure the phoenix first movement was the head looking at the window then looking down at the floor before it jumps out of the clock tower. This shot involved some of the basic anticipation and jumping animation I learnt last year. The last shot is of the Clock tower and the phoenix is shot out of the clock tower. The animation for this was simple but we made a change to the shot. Instead of the camera facing the clock face i moved it to a slight sidewards angle so that when the phoenix flew out the audience can see the distance travelled making it more effective. The After Effects team are using firework effects to make the phoenix appear as though its on fire. The majority of all the C.G elements are now complete the only thing that needs to be done is the lighting but the c.g team require the stop motion team to give them all the lit shots so that the stop mo elements match the c.g ones.