I was excited to start modeling my characters. I had previously drawn turnaround poses so that i could model from a front and profile view. This is generally considered an easy alternative to creating small maquettes of my characters however in most cases the desired effect of the model is rarely achieved in the drawing and in my case i felt as though I was tweaking the design of my character when modeling in the Maya software to get the desired look. In industry, the larger 3D studios such as Dreamworks and Pixar have a large collection of actual 3D clay models and drawings for the C.G modellers to ork from, in some recent cases C.G models have been created by scanning a maquette into a computer however the polygon number is extremely high making the C.G software run at a much slower rate. I have had quite little experience modelling characters. Last year I had to model three squire characters that all looked quite similar, none of the models were particularly complicated and I didn't have to think about facial or body topology which when building my Ponch and Chique characters I most definitely would. Facial topology is essential when modelling for animation. It allows the rigger to easily control the movement in the characters eyes, nose and mouth and create expressions that can later be controlled as blend shapes. I had no previous experience with topology and struggled for a while to grasp it. I searched the web for images or diagrams that would better explain to me what facial and body topology looked like. After finding some very useful images I began rebuilding my characters face round a shape that I had created that resembled the basic shape of Ponch's Head. I started by extruding the faces around the left eye of the character. I then began inserting edge loops so that I could achieve some good topology and decent eye deformation when creating my blend-shapes for the character. After i created a decent enough eye i then duplicated it with an 'instance' special attribute that would mirror what ever I done on one eye to the other so that i would have a perfectly symmetrical face. In my case my characters are both quite simple so symmetry works well in however in most other cases it is better to make some slight alterations to each side of the characters face so that they appear more realistic. This can be done by altering the topology or vertices's on the face in Maya or later when creating Normal/ Diffuse/ Bump maps in Mud Box. If I have enough time I would like to add some minor bits of detail to the model of Ponch especially on his hands and clothes where creases in the cloth and skin will be needed.
After modelling the eyes I had grasped creating facial topology so creating the mouth and nose wasn't too difficult. I joined the faces together creating Ponch's face and head. Unfortunately i had been concentrating too much on getting the topology correct that i had ignored the exact shape of the Characters head. When i smoothed the model there were wrinkles and dents in the face from where the edges were too close together. I began fiddling with the position of the vertices's, it became very frustrating and time consuming. I experimented with creating the basic shape of the head and clicking the make live command which meant i could drag out my vertices's to snap into place creating the correct shape for the characters head however I wanted to move the vertices's in one axis but couldn't so it made positioning them very difficult. Eventually i discovered a tool that i had forgotten about, the 'smooth' brush and 'pull' brush. By playing around with these handy tools i was able to get the perfect head shape for Ponch.
After I had completed the Face the Body wasn't to difficult. I needed to make the body quite simple anyway so that the n cloth 'poncho' would react well to it. The upper body and lower body are separated by a pair of pants so i didn't have to worry too much about joining the topology between the two. It is important to consider how you want the character to move. I added edge loops round the places on the body that are most likely to bend e.g shoulders, fingers, elbows this would hopefully make painting weights easier in the rigging stage.

The images are examples of Maquettes used by studios and example diagrams of facial topology. 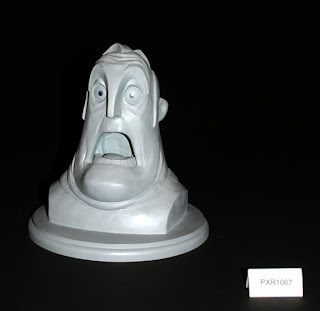 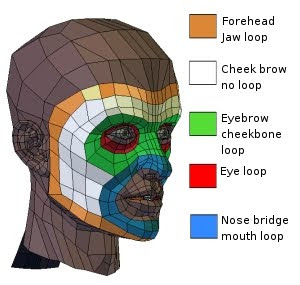 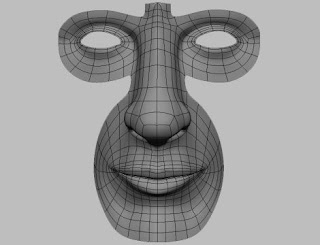 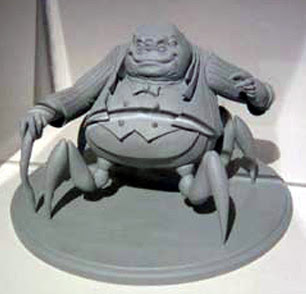 Posted by adam lawrence at 12:18 No comments:

After spending a long time perfecting the story of my production I began designing a storyboard. I wanted to use a variety of shots. Because of the scale of a festival to minimise modelling too many background elements I decided to use quick close up shots to emphasise the comedy. When putting together the animatic I carefully timed the shots to what i thought would give perfect amount of animation time combined with the comedic effect of the shot. Producing the animatic gave me the opportunity to play with sound a see how sound could be used to create comedy effect.
Posted by adam lawrence at 15:56 No comments:

Pitching my idea to a panel gave me professional experience for the future. I used my wow image and photographs taken for research to create a short video with high impact. The panel made it clear it was important that the relationship between the two characters must be obvious for the audience to engage with them.

Posted by adam lawrence at 15:42 No comments: 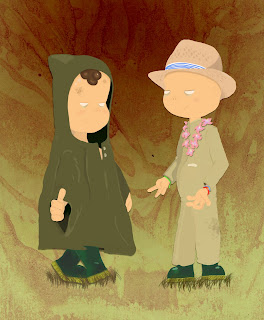 A design Bible and good portfolio are the key to getting an idea off the ground and noticed by studios. I felt it was important that I had neat copies of character designs and poses as well as concept art. Concept art would be key in pre production stage of the animation. The colour scheme, style and mood of the piece should be reflected through the concept art. Although my production will be in 3D I painted concept pieces and character designs in Photoshop. I plan to then build my 3D models from the initial drawings and measured turnarounds. Because of the festival theme I decided to focus on a greenish colour scheme with exception to novelty festival props and lights from the stage. I watched the Pearce Sisters animation and really liked the green colour scheme they had decided on for the characters and inside their home. Ideally would of liked to produce an animation using a similar technique to the Pearce sisters, a mixture of 3D animation with painted frames giving it a 2.5 Dimensional look.

click link to watch The Pearce Sisters
Posted by adam lawrence at 14:28 No comments: