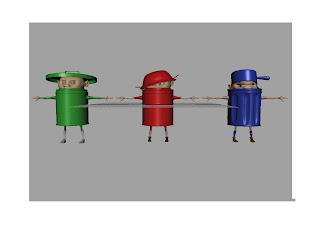 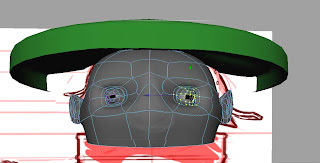 One of my main objectives for this term was to improve my Maya knowledge and modelling skills. This is partly why I wanted to involve myself in a 3D production for the Talking Dog project. My responsibilities within the 3D department is to build the models of the knights squires, rig the characters so they are able to move, build any props or extra models for the production, animate a selection of all the models, U.V un-mapping and helping with texturing in the 2D department. A challenging task that if completed well will have taught me more about Maya and the pipeline of a 3D production.
The Exeter Ident project I produced last year taught me to be a lot more organised. Pete took on the role of producer. Instantly the 3D department worked out a computer filing system that could be easily followed so that the team didn’t struggle finding files. Project folders for every model and referencing the animation were things that I hadn’t done before in the previous Ident project but now I realise that a short amount of time organising saves a lot of time in the production. Improving my organization skills was another goal for this term, time management is crucial with dealing with this project and any time that can be saved is vital.
Tony designed the Squire characters in Photoshop and gave me the ‘turn-around’ files to build my models from. The team decided that because of the amount of time we had that all the 3D Squires should look similar with subtle differences to save time, meaning that the personality differences would have to be obvious in the animation. The original drawings were quite difficult to work from because they were to simple resulting in the models looking quite dull and very similar. Changes were made to the body of the squires. Now each individual squire would be wearing a certain type of cylindrical object for example; the red squire is now wearing an old soup tin and a colander on his head, the blue squire is wearing an American style trash-can with a pot on his head and the green squire wears a beer can and a dustbin lid on his head. The original designs were to plain, this way the characters have more comedic value. When I first completed the Squires they didn’t look as I had hoped and actually looked quite evil. I wasn’t sure why though so I imported an image of the face into Photoshop and using the warp tool and paint brush moved the face around and added features that would make the squires look a bit for friendlier. I referred to some online tutorials when modelling difficult elements like the ears and face loops. It was my first time modelling a face and I wanted to do it using planes so that next year I could model quite complicated characters. Overall I was very happy with the finished models.
Posted by adam lawrence at 07:25